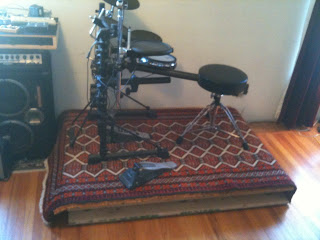 It's safe to say that most everyone loves music; but obviously, not all of us are musicians. Furthermore, all people who love music, including musicians, don't necessarily want to hear music at inappropriate times, or when not in the mood. Typically, when people are in the mood to hear music, they put on a record, turn on the radio, or go out to the club. Essentially though, weather or not musicians themselves are in the mood, they need to play their own songs regularly, over and over, so that they are presentable for the stage... Rehearsal!

Interestingly, I've become pretty firm that the average non-musician believes that all music acts just get on stage and play, (like it somehow "jams itself out" or something); completely unaware of the painstaking polishing going on behind the curtain. I don't need to tell you musicians about the rushing home from work, packing up the gear, down the stairs to the car, drive to the space, haul the gear in, bang your knuckles on the door jam, set up, tune up, three hours of volume battle, fixing the sucky parts, creative differences; and then again in reverse, pack up the gear, haul it to the car, drive home, double park, gear back upstairs, re-park the car, your significant other is bummed because it feels like you're always gone at rehearsal, and you've still got two more rehearsals this week.

So, with the preceding tangent expressed, as well as my responsibilities and exhaustion increasing by the minute, my aging wisdom and ingenuity betrothed to me an epiphany. Could we supplement some of our rehearsals at home; quietly, with a headphone mixer and an electric drum kit? My initial inspiration for the idea definitely rooted from the new technology of the Roland V-Drums; and to me, a guitarist and son of a drummer, finally seemed like an experience a drummer might tolerate in small doses. Regardless of the outcome, I also figured it would be a fun toy to have around, and a way to get my own drumming fix in from time to time.

I took the plunge and purchased the Roland TD-3 Electric Drum Kit for $900; boxed with mounting rack, four rubber pads for the toms and hat, one mesh pad for the snare, two rubber cymbal pads, one kick pad, hat pedal, sound module and cables; but the kick pedal, throne and sticks were sold separately. Once assembled, this thing was instant fun; but noted the biggest challenge for a drummer would be tolerating the high hat setup; a rubber pad that doesn’t actually open and close, apart from the extension pedal and samples in the sound module. The second challenge, depending on the jazziness of the drummers style, was the rubber cymbal pads. The crash wasn’t too bad, but the ride would also prove tough to get bow color and bells going.

The other amazing component to the setup was the headphone mixer, which turned out to be a Mackie HMX-56 for $400; four instrument inputs, one aux input, and six headphone outs, all custom mixable. In the headphones, the V-Drums sounded great right out of the TD-3 module, we tapped the line outs from our amps for tone, and the vocal ran through an effects rack.

As “silent” as the V-Drum kit is, I quickly realized that the stomping and thumping of the kick drum pedal would transfer directly through the floor of our upstairs apartment; and considering that my downstairs neighbor might not appreciate that, I built a simple riser out of plywood, 2x4’s and a persian rug. Fast forward five years of rehearsals and three different downstairs neighbors that, when I inquired, each responded that they were not at all bothered by the noise, we finally got a bit more of a sensitive one. Within minutes of our rehearsal, my brand new downstairs neighbor was up knocking on our door; which, we didn’t hear due to the most rockin awesomeness cranking away in our headphones. Nevertheless, his note on my door made me realize that I needed to upgrade my drum riser, and moreover, left me wondering how my previous neighbors had been tolerating the noise all this time. Who knows, maybe we’re the reason for such high turnover downstairs?!

Internet searches about this problem led me to an increasingly popular drum riser design using multiple tennis balls as the actual sound buffer between two sheets of MDF. The theory is that tennis balls are held in place by holes, slightly smaller than the diameter of the balls; and in essence, the top layer of MDF floats on the tennis balls. The tennis ball theory was sounding pretty good to me, but I didn’t want to bothered with the messy job of drilling saw holes, so I continued to peruse the aisles of Home Depot for something else to jump out at me. Finally, I ran across some rubber pipe end-caps with steel cinch bands that a tennis ball could just as well fit into, and even create another level of noise reduction. Although MDF is supposed to transfer less noise, I decided to just get another sheet of 1” plywood for sturdiness, and in addition, picked up four small 1” rubber feet for the bottom to further minimize overall contact with the floor.

In closing, this has seemed to work tremendously; no more complaints! Please see my progress photos, supply list and links below. Thanks for reading, and stay tuned for more independent musician guerrilla tech soon! 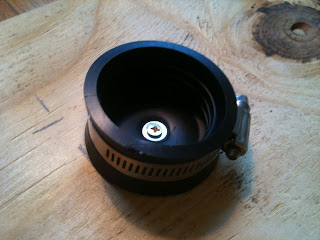 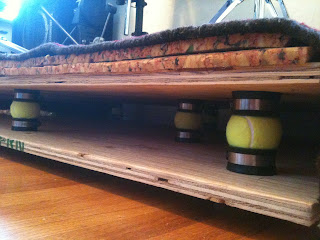 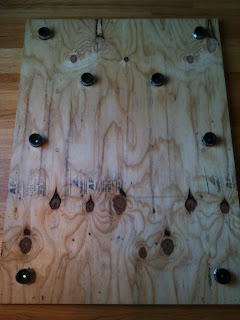 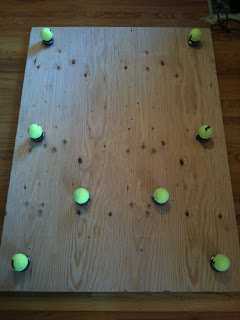